We define the Lebesgue integral using the standard machine, starting from the one for indicator functions.

Unlike the Riemann integration which was defined as the limit of sums of areas of rectangles that partitions the domain of a function (Riemann sum), the Lebesgue integral is defined as those that partitions the image of a measurable function. While the “height” of each rectangle was of interest in the Riemann integral, it is the “width” of it that is important when defining the Lebesgue integral. We use the measure of inverse image of a partition of a function’s codomain as the width. (This is why we named such functions “measurable”)

The following definitions and statements are all assuming a measure space $(\Omega, \mathcal{F}, \mu)$ where $\mu$ is $\sigma$-finite unless otherwise noted.

An indicator function is trivially a measurable function since its inverse image is either $\phi$ or $\Omega$.

A simple function is a finite weighted sum of indicator functions. 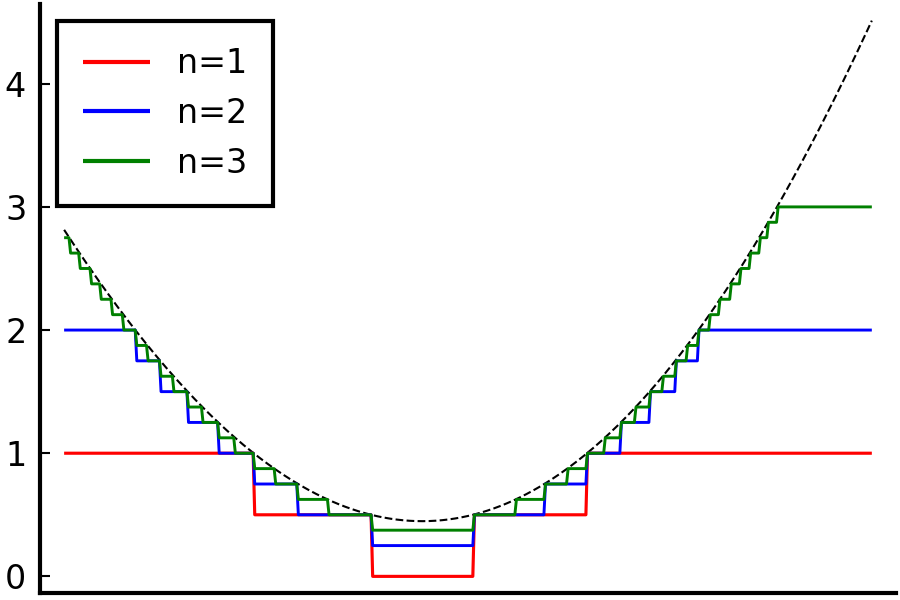 There are several properties of the integral naturally arises from the definition.

Since it is not difficult to show, I will leave it as an exercise. To prove somewhat straightforward-looking property $\int_E f+g d\mu = \int_E f d\mu + \int_E g d\mu$, we need help of monotone convergence theorem, which will be covered soon.

I would like to finish this part by defining expectation of random variables. Recall that a random variable $X$ is a measurable function on a probability space $(\Omega, \mathcal{F}, P)$. The expectation is merely the integral of $X$ on $\Omega$ with respect to $P$. That is, $EX := \int X dP$.

This post series is based on the textbook Probability: Theory and Examples, 5th edition (Durrett, 2019) and the lecture at Seoul National University, Republic of Korea (instructor: Prof. Johan Lim).

This post is also based on the textbook Real and Complex Analysis, 3rd edition (Rudin, 1986) and the lecture at SNU (instructor: Prof. Insuk Seo).